Friday 24th September: The opportunity to meet up with Sir Oliver Heald QC MP the long serving professional MP for the North East Herts constituency and a previous Solicitor General for the U.K. Government. Sir Oliver kindly introduced me to the Right Honourable Matt Hancock MP former Minister of State for Health at a time of great importance to the nation as the Covid pandemic started, spread, and subsided as a result of providing the right conditions for Vaccine development and delivery.

I had first met Matt in July 2016 at a meeting organised by the now Lord Lilley of Offley in Harpenden when Matt had been appointed Minister of Digital and Culture with the added responsibility for Media and Sport in 2018 when he then subsequently moved onto the Minister of Health and Social Care. It was a great opportunity for him to tell us his history and how his family had invented the PAF (Postcode Area Finder) which we all use today across the many apps that automatically find our address from our postcode. He explained how his family business almost went bust owing to the delayed delivery of a payment from one customer and how he has experienced the ups and downs of business life as a result.

I started my conversation with Matt last Friday by thanking him for his service to the country in his many ministerial roles, but particularly his most recent one. It is one thing holding the coveted position of Secretary of State for Health but quite another when the world is blighted by a Covid pandemic and society is so adversely affected as a result. It must be said that he managed the crisis well. There were clearly many mistakes which the government made which is often the case at a time of a war albeit in this case with a virus, but there were clearly very important and positive steps made early in the crisis that created the situation we now see developing.

I asked Matt why the press did not make more of the position regarding our auspicious first steps with the AstraZeneca vaccine and the clear advantage provided by Brexit in securing a vaccine without the EU negotiating on our behalf, which as we all know was greatly delayed as a result and which made the EU cite the UK and Brexit as the issue. Matt remarked that his government wanted to keep a lid on their exuberance, as they did not want to offend the EU and it was Boris Johnson who insisted on maintaining harmony with our EU neighbours.

In relation to the adoption of the AstraZeneca vaccine, I said how marvellous it was that Pascal Soriot the CEO had taken the decision not to profit from the supply, as in the words of the AstraZeneca CEO, “He was not able to look his children in the eye if he had”. Matt agreed and then stated that he had insisted on securing exclusivity for the initial supplies to ensure that Donald Trump did not dive in and secure supplies ahead of the UK. Our prompt response to obtaining supplies has led us back to mixing in public once again and this would not have been the case without such early adoption and securing supplies. It was wonderful to be mixing publicly once again and we definitely owe a debt of gratitude to Matt and his Cabinet colleagues for their hard work and diligence during the pandemic and getting us through the worst of it.

Sir Oliver Heald has now served his constituents for the past 29 years and Matt made the point that he had greatly assisted him at various times in Government. Sir Oliver said “Matt Hancock held a great Office of State at a time of national crisis, and it was fascinating to hear first-hand how the early decision to invest in vaccines was made and how the roll-out was achieved so quickly. Matt had been told it could take 5 years and it was delivered in months. Matt also answered a range of questions about the challenges of the pandemic.” 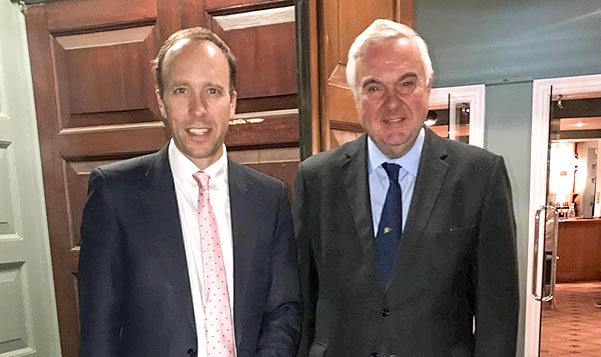 Promote your company with biz4Biz